Vanilla is a common ingredient in most baked treats. It was dubbed as the world’s most popular flavor and aroma. That said, there is a huge possibility that your dog was already exposed to it in the past one way or another.It could be one of the ingredients in the ice cream you gave him as a treat or in that pancake he really likes. But can dogs eat vanilla without having any problems?

In today’s post, we will talk about the safety of giving vanilla to canines. This is a relevant topic, especially if you are still confused about the difference between a good old natural vanilla flavoring and the vanilla extract.Oh, and before we forget, there are also vanilla imitations being sold in grocery stores. They are way cheaper than the authentic vanilla spice but you have to be warned about their ingredients.

Vanilla extract is actually on the list of potentially toxic flavorings for dogs. Why is that so? And what should you do if your puppy accidentally got into a bottle of it? I bet you already have a lot of questions in your head, but let’s talk about the basics first.

Decoding Labels: What is in a bottle of vanilla extract?

There are several types of vanilla used in cooking and baking. The most commonly used type is the one from the planifolia species, popular due to it has high vanillin content. Most of this orchid plant can be found in Mexico and Central America.

This type of vanilla is being used in producing the vanilla extract. This solution is obtained by softening the vanilla pods before filtering them in a mixture of alcohol and water. This is the type you usually see in your local supermarkets. It is the one we use to bring out the flavors in our baked treats such as puddings, cakes, and cookies.

Here are the typical ingredients of a store-bought vanilla extract:

Vanilla beans – this is the only organic thing you will ever have in your vanilla extract. Every 8 oz. of vanilla extract uses seven pieces of vanilla beans. Also known as vanilla pods, these beans come from the orchid plant of vanilla. It usually takes six weeks before they mature since day 1 of fertilization. Before they become fully mature, farmers would plunge them into hot water to cease the ripening process. That iconic aroma only comes out once they are fermented and have wrinkled brown pods. The tedious process of curing the beans is the reason why vanilla beans are quite expensive. A single bean can cost around $6.

Alcohol/Ethanol – the pure vanilla extract contains 35% of alcohol. For some, that accounts for as much as one cup of vodka 70 proof. Rum, brandy, and bourbon can also be used as substitutes. Bourbon vanilla uses ethyl alcohol or sugar cane because ethyl is good at extracting the flavor from other substances. Alcohol makes vanilla taste richer. The beans should be drenched in alcohol for a few weeks for the flavors to come out.

Sugar – many commercially-produced extracts contain sweeteners like sugar or corn syrup. If you are strict when it comes to giving your dog sugary foods, do note that even some “pure vanilla extracts” use corn syrup.

Sodium benzoate – a majority of artificial vanilla extract may contain this preservative. Presuming that you haven’t heard of it before, sodium benzoate has been widely used in cosmetics and personal products before it became more popular as a preservative. It is actually linked to certain types of cancer such as leukemia and blood cancers.

Propylene glycol – this generally safe food additive is commonly used in imitation vanilla extracts. It was not classified by the Department of Health and Human Services as carcinogenic, so you should not worry if you find it on the label.

Take note that pure vanilla extract is entirely different from vanilla extract. The pure one, normally labeled as “vanilla flavoring”, is glycerin-based meaning it is a non-alcoholic vanilla. If you are afraid of the possible dangers the food coloring, sugar, and sodium benzoate may pose, it is best to make your own vanilla flavor at home. Or, if you want to be sure your dog is safe in case he accidentally got the bottle, opt for a pure vanilla extract rather than synthetic vanilla.

Why is vanilla potentially toxic to canines?

As mentioned above, the vanilla extract contains alcohol. You must have been aware that alcohol is toxic to dogs. Vanilla extracts commonly use vodka with 70 proofs, meaning it contains an acceptable amount of alcohol. While a 70-proof alcohol is relatively low for us humans, this amount is enough to poison a dog. Alcoholic beverages, even in small quantities, are not recommended for canines.

Alcohol poisoning in dogs can be a serious issue. It can stress their organs. Respiratory failure leading to death is the worst thing that can happen to an intoxicated pooch. Canines should be given immediate treatment after ingesting even half an ounce of alcohol.

What to do if your dog drank vanilla extract?

So you just went out for a while and found an empty bottle of vanilla extract lying on the floor when you came back. If you suspect that your pooch got curious with it and ingested all the content, you may induce vomiting.

For canines, the safest way to induce vomiting is to administer 3% hydrogen peroxide. You can buy it from the drug store or supermarket. If you already have hydrogen peroxide at home, check its freshness by putting some on the sink to see if it bubbles. If it doesn’t, it might fail to do its job on your dog.

The advisable dosage for canines is one teaspoon or 5 ml for every 10 pounds of weight. Give your dog the recommended dose of hydrogen peroxide using a large syringe or a turkey baster.

Here are some safety guidelines in case you need to induce vomiting at home:

2. Expect your dog to throw up after around 10-15 minutes. If he does not throw up, give him a second dose but be aware that too much of this substance can cause gastric ulcers in canines.

3. In case the second dose also failed, do not administer any more hydrogen peroxide. Better call your vet or ask for help from an animal poison control center.

4. Only use a 3% solution, anything beyond that can harm your puppy. The 6% solution is the one usually used in hair dyes. Never use “food grade” or 35% hydrogen peroxide because they are not meant to be ingested.

5. Don’t give your dog any vomiting medication other than hydrogen peroxide. Only vets and experts are able to administer stronger meds such as apomorphine hydrochloride.

6. Move your dog around. This is to make sure that the emetic mixes with all the contents of his stomach. In case your dog does not want to move, it would help to shake his stomach.

7. Don’t try to use alternatives, like mustard and table salt. These are not effective in trying to get a dog to throw up.

When the induced vomiting is successful, it is important to let your dog rest before offering him any food. It would also help to collect a sample of the vomit in a leak-proof container to submit it to your vet for evaluation.

If you are not confident about inducing vomiting at home, it is better to ask for help from your pet doctor. Experts also do not recommend doing it if the dog already shows signs of weakness.

Can your dog eat foods with vanilla?

Since most foods with vanilla are also loaded with sugar, experts do not recommend giving them to dogs. Canines do not need sugar in their diet. For dogs with a sweet tooth, you may offer dehydrated sweet potatoes, beets, and blueberries as treats. These are wholesome choices that will not cause any harm to your Peanut. Give those baked sweet treats occasionally and not every time your dog begs for them.

The vanilla bean itself is not toxic to dogs, it only becomes harmful to canines once it is turned into an extract. This is due to the alcohol content in it. In case your dog ingested vanilla extract, you may administer 3% hydrogen peroxide to induce vomiting. If your dog did not vomit after two attempts of induced vomiting, the best move is to consult your vet. What are the Pros and Cons of Raising a Champagne Pitbull 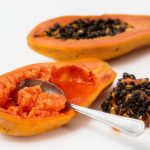 My Dog Sleeps With His Eyes Open: What Should I Do?

How to Raise a Mini Heeler

EB - December 19, 2019
0
A mini Heeler is a small Heeler, a breed known for its intelligence and high-energy. The Heeler or the Australian Cattle Dog was actually...