Spinach was once the most vaunted of all vegetables. All veggies are nutritious but there must be something very special about spinach, because even Popeye loved eating it. It was named as a superfood and was even referred to by some as the “healthiest of all vegetables.”

So what if your Buddy right there loves spinach too? Can you give spinach to your pet without worries? In today’s post, we’ll find out whether spinach is good for dogs or not. We have to tackle this one since some experts believe this vegetable is a big no-no for doggies.

If it is safe, then what are ways to serve it to our fur babies? Read on to learn more about the benefits of spinach for dogs and the possible risks involved in giving it to them.

Can Dogs Have Spinach?

Yes, dogs can eat spinach as long as it is cooked and given in moderation. Spinach should not be given to dogs in large amounts because of the content of oxalate, an anti-nutrient that is also present in other leafy vegetables, nuts, and seeds.

Oxalate, also known as oxalic acid, is the reason why spinach has a lingering bitter taste. It is toxic when consumed in large quantities. Spinach does have this naturally occurring compound but only in moderate amounts.

Spinach contains soluble and insoluble oxalates. The soluble ones can cause kidney failure when ingested in excessive quantities.

The oxalic acid in spinach can bind to minerals in the body to form compounds. As an anti-nutrient, it reduces the mineral absorption in the body. Thus, it is best to give spinach in small amounts.

If your dog is currently suffering from kidney problems, avoid giving him spinach at all cost. It forms kidney stones when combined with calcium.

Benefits of Spinach to Canines

Perfectly healthy dogs can safely consume spinach from time to time. In fact, it is an easy way to incorporate greens into your dog’s meals since spinach does not taste as strong as other green veggies, like kale. It’s also less bitter. Here are the amazing benefits of this dark leafy green to our furry little friends:

1.It aids Fido’s digestion. Spinach is an excellent source of dietary fiber. A cup of spinach contains 1 gram of fiber that is important in carrying waste and toxins out of the body. Fiber is also beneficial in preventing constipation or diarrhea.

2.It promotes a healthy skin. It is rich in skin-nourishing vitamins, such as Vitamins A, C, and E. Vitamin E, for instance, is essential for healthy coat and skin in canines. Without enough of this vitamin, dogs can become more prone to skin itchiness and dryness.

3.It can strengthen your dog’s bones. A cup of cooked spinach provides as much as 244.8 milligrams of calcium. Dogs should have enough calcium in their diet to have stronger bones.

5.It protects against cancer. Nobel Prize Winner Dr. Otto Warburg said no disease, including cancer, can exist in an alkaline environment. Spinach is one of the vegetables with the highest alkaline content.

6.It is good for the brain. The folate and the beta-carotene in spinach are both helpful in boosting the brain. Half a cup of cooked spinach provides around 121-139 micrograms of folate.

7.It is beneficial for good eyesight. Spinach has plenty amounts of lutein and zeaxanthin. These antioxidants, also present in other green veggies such as kale and broccoli, are helpful in protecting the eyes against age-related macular degeneration. Similar to what happens to our elderlies, the majority of older dogs also suffer from macular degeneration.

8.It is anti-inflammatory. The anti-inflammatory property of spinach is so powerful that one study suggested that it reduces asthmatic inflammation due to its Vitamin K content. It has around 444 micrograms of this nutrient for a half a cup of cooked spinach.

9.It boosts metabolism. Spinach is one of the foods that naturally boost metabolism. This is because it is a rich source of B Vitamins. It contains the Vitamins B2, B6, and B7.

10.It maintains a normal blood pressure. Spinach has all the key ingredients not just for maintaining but also for lowering blood pressure. Aside from being a low-calorie treat, it is also rich in heart-healthy nutrients such as potassium and magnesium.

Ways to Give Spinach to Dogs

The best way to give these veggies to dogs is by steaming them first without any salt or seasonings. Spinach should be chopped to make it easier for a dog to break down.

Just a reminder, rinse the veggies properly before cooking them. They may carry bacteria like E-coli so for hygienic purposes, don’t forget to wash them thoroughly even if the label says it has been “pre-washed”.

Meanwhile, cooking the spinach does not only make it simpler for your dog to digest, but cooked spinach is actually more nutritious than when it’s raw.

By cooking the spinach, you get to boost its antioxidant content. The antioxidants are released as the cell walls break down because of the heat. Researches indicate that eating cooked spinach, compared to raw, produces higher levels of beta-carotene.

You can also use spinach as a kibble topper. If Fido likes mash sweet potatoes as a topper, you can add a cup of chopped spinach in your usual kibble topper recipe.

If your pet is fond of drinking smoothies, you can add some spinach to your green smoothie recipe. It can be added along with other nutritious veggies like cucumber and carrots. You can give it to your pet as it is or frozen in ice trays.

How to Choose Fresh Spinach for Your Dog

Spinach should be consumed immediately because, according to researches, these veggies begin losing their nutritional benefits after days of harvest. It’s important to check the “best before date.”

When buying spinach, always look for perky and green leaves as this indicates freshness. Don’t buy spinach that has already wilted and has yellow leaves.

Spinach needs to be stored in a cool and dry place. It can easily go bad because of moisture and will start losing their nutrients when not kept in a cool place.

To tell if the spinach has gone bad, you can use your sense of smell. Fresh spinach is not supposed to have darkened color or texture that looks like it was moistened. Also, it should not have a strong odor.

After opening, fresh spinach can only last three to five days. If still unopened, spinach can last for five days or even a week as long it is stored properly.

This recipe uses parmesan cheese. This kind of cheese is often used in making dog treats because it has low levels of lactose. Parmesan is a mild and low-sodium cheese so you don’t have to worry about giving it to your dog, especially if he can easily tolerate dairy. Here’s how to do this spinach-infused doggie treat:

In case there are any cookies left, just store them in an airtight container. They can last up to 10 days when kept in the fridge or even up to a couple of months when stored in the freezer. To make this dish healthier, use a low sodium broth.

Does your dog love salmon but is a little bit skeptical in tasting spinach? You can try incorporating these leafy greens in your dog’s favorite food, like salmon. If you’re pretty excited to try, just follow the instructions below. This recipe is so easy to make, you will not spend more than 10 minutes cooking it.

Salmon is definitely safe for canines as long as it is well-cooked. Dogs can benefit from the omega-3 fatty acids in salmon that are great for brain health, not to mention that they can also boost your pup’s immune system. For this recipe, you can use canned salmon. Just make sure it is in water and not in brine or oil.

This treat is the best meal even for puppies with a sensitive stomach. It can be considered a high-quality treat for dogs, since the main ingredient is chicken. As we all know, dogs would die for meat so your pup will surely enjoy this meal. Just follow the recipe below to make a healthy homemade treat for your pet:

The number of cookies depends on the size of your cookie cutter. If you use a small cookie cutter, this recipe can produce as much as five dozens cookies. You can store them in an airtight container.

Spinach is not that bad for canines. Your dog will not get sick if he eats is once in a while because it would take very large quantities of spinach for anyone to get poisoned. In fact, it will be harmless to give it to puppies.

Still, it is best to let your vet know if you’re planning to add this vegetable to your pet’s diet.

Canines don’t really need a lot of veggies in their diet. Fruits and vegetables should only account for 15-25% of their diet. The rest should be a large proportion of meat, 10% of bones, and 10% of offal or internal organs like the liver.

But if you wish to give veggies to your dog from time to time, spinach is a safe option. Just make sure you give it boiled because raw spinach is quite difficult to digest. 10 Reasons Why Cavapoochons Are the Best Designer Dogs Ever 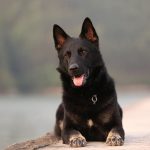